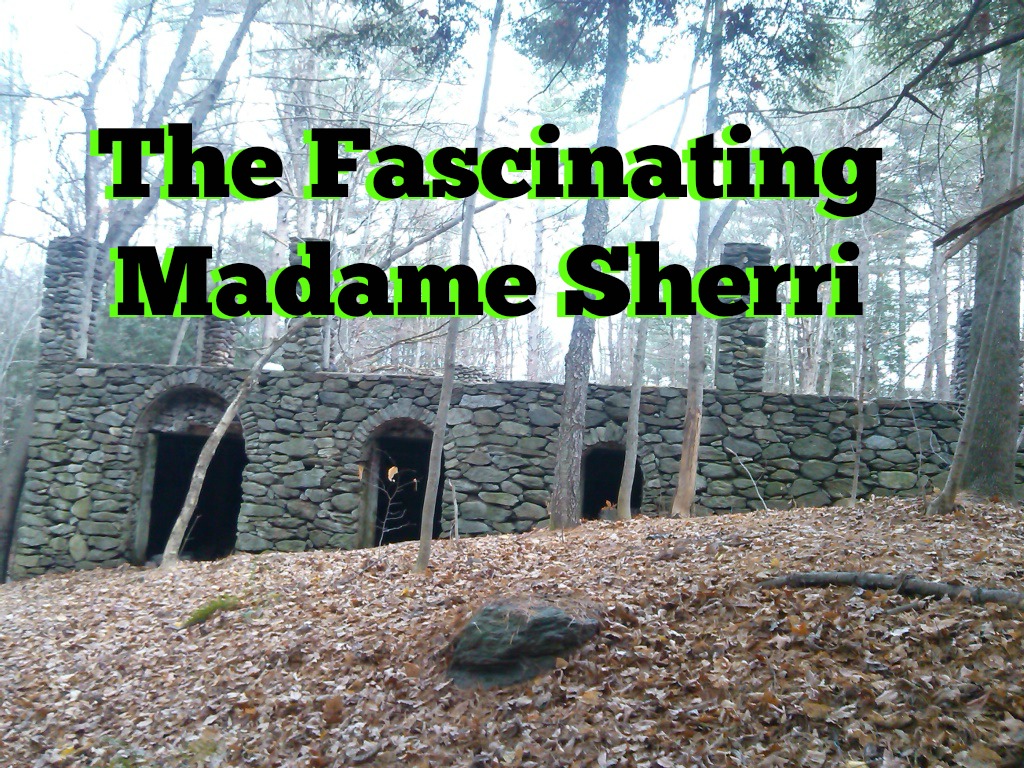 This guest post is brought you as a means to share more about Madame Sherri after my own visit to the location.

Madame Sherri is mostly known for an unusual castle-like house built for her in a rural area of New Hampshire–its ruins are now popular with hikers and those fascinated by abandoned and mysterious places. Local lore tells of the bemusement she engendered among the local populace with her fancy parties and her ostentatious lifestyle. But there is much more to the story of Antoinette Sherri.

First of all, that was not her real name. A 1924 newspaper notice of the death of her husband, Andre Sherri (that wasn’t his real name, either), identified him as the “beloved husband of Antoinette Bramardi Sherri,” suggesting that her maiden name was Bramardi. But newspaper articles from 1911, regarding the arrival in America of her and her husband, gave her name as Antonia Delilas. These articles tell how Andre (whose last name is given as Riela) and his wife, a Parisian actress, were at first shunned by his father, an Italian diplomat. Andre’s family, however, came to accept his bride into the family. There’s a problem with this scenario, however. It was all a hoax.

Andre was, in fact, not the son of a statesman from Italy, but had been born in New York. He had disappeared several years earlier, when he was sought as a material witness in a sordid criminal case that involved extortion and sexual chicanery. Andre’s secret was revealed in 1912, when New York City police looked into a theft of jewelry that the couple had reported. One of the investigators recognized Andre from the earlier case, and said “You’re Tony Macaluso.” Andre was incarcerated briefly, though the charges against him ended up being dropped.

In those days, the couple performed as dancers, calling themselves Monsieur Andre and Mademoiselle Sherri (the story is that she chose that surname because she liked a play titled “Madame Sherry”). They traveled around the U.S. on the vaudeville circuit, usually with a third person. This person, a young woman, would perform flamboyant, almost violent dances with Andre, with his wife billed as a “tangoist.” As time went on, they settled down in the New York City area, and undertook new careers: Andre produced dance review shows, and Sherri created costumes for her husband’s shows, as well as those of other producers like Flo Ziegfeld. They became known as “Andre & Sherri.” An ad in Variety in 1917 announced the firm, saying that the couple who were “formerly known as the World’s Greatest Dancers” were now “New York’s Greatest Producers, Dressmakers, and Costumers.” Show business in those days was something of a hurly-burly affair, and the Sherris engaged in their share of hijinks. There was, for example, the time that Andre was sued by Ziegfeld when he appropriated a song from Ziegfeld’s Follies and used it in a show he staged in Chicago.

Andre’s death in 1924 left his wife, by now known as Madame Sherri, on her own. She traveled some, occasionally with Charles LeMaire, who had learned about costuming as an employee of Andre & Sherri. Eventually, Madame was introduced to Chesterfield, New Hampshire, and, with the financial help of LeMaire (who had begun a successful career in Hollywood), had the “castle” constructed.

The stone edifice was not her residence, however. She lived in a rather barren farmhouse nearby, and used the castle only when hosting social events. When going about town (Brattleboro, Vermont, was the closest place for her to shop–and be seen), she was driven around in a fancy Packard convertible. She was usually adorned in trappings of her former show business life: furs and fancy gowns.

Over time, her finances suffered–mostly because LeMaire had decided he no longer wished to support her. She was cared for as a ward of the State of Vermont. Her castle fell victim to partiers and vandals, and eventually burned, leaving only the stonework that remains today.

Madame died in Brattleboro in 1965. Her funeral was attended by just a handful of people.

3 thoughts on “The Fascinating Madame Sherri”